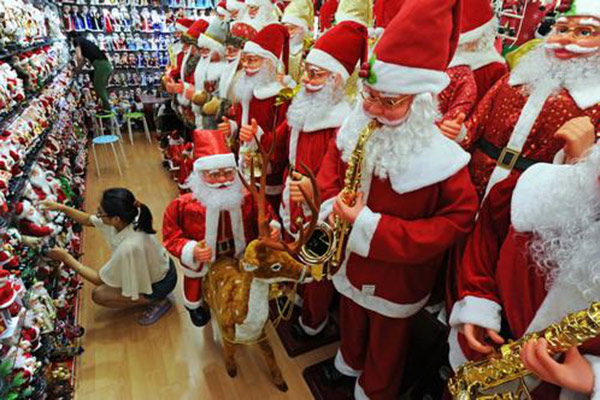 Christmas is not an official holiday in China, but more and more people are beginning to accept it. This means more and more Christmas decorations shipped from Yiwu, Zhejiang.

American media said that Yiwu, an hour's drive from the high-speed rail south of Shanghai, reportedly produces nearly two-thirds of Christmas decorations around the world. Yiwu is an inland city with a population of about 1.2 million. According to the monthly records of Hangzhou Customs, between September 2016 and August 2017, more than 600 factories and workshops around Yiwu produced Christmas-related products worth US $ 3 billion.

According to ABC News website reported on December 5, in this city known as China's "Christmas Village", Christmas trees lit by Christmas hats, metal balls and LED lights reached their peak in the summer.

Some Christmas product factories told ABC News that at least 30% of their orders came from the United States, while others shipped from Yiwu to Russia, Latin America, and China.

Xun reported that Christmas is not an official holiday in China, but more and more people are beginning to accept it. This means more and more Christmas decorations shipped from Yiwu, Zhejiang.

"My children really like Christmas; it feels like Chinese New Year," said Huang Aijuan, the owner of a company that makes artificial Christmas trees.

According to reports, in order to receive the goods in time, Christmas goods dealers around the world go to Yiwu several months in advance every year. Their first stop is often Yiwu International Trade City.

Located in the center of Yiwu, the Yiwu International Trade City is a multi-storey wholesale market. This shopping maze is composed of five parts and covers an area of ​​2 square miles, which is equivalent to 26 flagship malls of Macy's Herald Square in New York. The Christmas Goods Division in Division 1 only accounts for a small portion of the 75,000 stalls that sell almost all of them at relatively low prices.

According to reports, Yiwu is indeed the origin of the "Made in China" phenomenon. In the early 1980s, the "reform and opening up" era began only a few years ago, and the Yiwu market began to take shape. Since then, the city has provided a wide range of toys, decorations, housewares, underwear, umbrellas and auto parts to the world.

According to the local government website, Yiwu has 13,000 permanent foreign residents, and there are a large number of traders in Yiwu and Africa, the Middle East and Southeast Asia. Due to the culture they bring, Yiwu can be said to have become one of the most diverse regions in China.

According to the report, in order to maintain its reputation as a world factory, suppliers in Yiwu are under pressure to maintain low costs and compete with other emerging economies with cheaper labor.

The workers in the factories visited by the ABC News website at the end of August were mostly migrant workers from all over China. They say they work 13 hours a day, seven days a week. A worker earns about $ 30 (about 198 yuan) per day.

A factory owner told ABC News that the local government asked her to improve working conditions, so she planned to move to a bigger place.

According to the report, but as the world ’s demand for Christmas decoration continues, Yiwu seems likely to become a Christmas workshop in the real world in the foreseeable future.